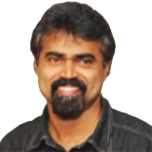 Prof. C.T. Aravindakumar received B.Sc. degree in chemistry from University of Kerala in 1986 (D.B. College, Sasthamcotta). A national level fellowship (NCL-Pune University) brought him to University of Pune for doing M.Sc. in 1986. He completed M.Sc. in 1988 and joined for Ph.D. at the same year. The Ph.D. thesis work with the title, Radiation Chemical Studies of Some DNA Model Systems, is an interdisciplinary topic which has relevance in chemistry, biology and environment (under the guidance of Prof.B.S.M. Rao). This involved extensive use of Pulse Radiolysis. The programme was completed in collaboration with the Bhabha Atomic Research Centre (BARC), Mumbai (with Padma Shri Prof.J.P. Mittal and Dr.Harimohan) and the Max-Planck-Institute (MPI) fuer Strahlenchemie, Muelheim a.d. Ruhr, Germany (with Prof.von Sonntag). He was the recipient of ICSC-World Laboratory (Switzerland) fellowship to work at the MPI, Germany, as part of the Ph.D programme. During this tenure, he also collaborated with Tata Institute of Fundamental Research, Mumbai, for experiments on Laser-EPR for radical detection. Immediately after his Ph.D. from University of Pune, he joined as a Lecturer at the School of Chemical Sciences of Mahatma Gandhi University, Kottayam, in 1993. He established a research group mainly working on the free radical induced degradation of DNA model systems, and of organic water pollutants, using Fenton, photochemical and radiation chemical techniques.
Later he joined the Division of Biochemistry of Katholieke Universities Leuven, Belgium for post-doctoral research in 1997 to work on a two year programme on nitric oxide – protein interaction (with Prof. Mark DeLey and Prof.Coulemans). The selected protein was metallothionein extracted from human foetal liver. Another post-doctoral fellowship from Max-Planck-Society brought him back to Max-Plank-Institute f. Strahlenchemie in 2000 (with Prof. Von Sonntag). He also worked as a Visiting Faculty for one year at the Department of Biophysics of Vrije Universiteit Amsterdam, The Netherlands in 2001 (with Prof. Rienk van Grundelle and Prof. Herbert van Amerongen). During this period he worked in the field of Laser (femtosecond) spectroscopy related to charge transport in DNA. He also established several collaborative research and made research visits in international laboratories such as at the Environmental Engineering Division of the California Institute of Technology, USA (with Prof. M. Hoffmann), Department of Chemistry of Pohang University of Science and Technology, South Korea (with Prof. T. Joo), Radiation Biology Division of GSF-National Research Centre for Environment and Health, Germany (with Prof. Eckard Schupp), University of Paris (S) (with Prof. J. Belloni), Norwegian University of Science and Technology, Trondheim, Norway (with Prof. May-Britt-Haag), Duke University (with Prof Mark Wiesner), Brown University and Plymouth State University, USA, Russian Academy of Science (TIPS-RAS), Moskow (with Prof. Teplyakov), St.Petersburg University, Russia, Technical University of Denmark (with Prof. Andreas Kaiser), Faculty of Engineering, Hokkaido University, Japan etc. He was selected as a Visiting Professor (full professorship) at the Laboratory of Geology & Environment, University of Paris-Est Marne-la-Valee, France in 2013 & 2015. Nearly 25 of his selected invited talks outside India are in various Universities and Research Organizations in Germany, Netherlands, Belgium, Italy, France, USA, Japan, Thailand, Hong-Kong, Vietnam, Brazil, Russia and Korea. He joined as a Professor at the School of Environmental Sciences of Mahatma Gandhi University in 2010. He was the Dean of Faculty of Environmental and Atmospheric Sciences of Mahatma Gandhi University twice (2012-14 & 2016-18). He also acted as the Director of the School of Environmental Sciences during 2012-2017.

He completed ten national and five international major research projects besides several ongoing projects. Research funding is mainly from DST, BRNS, ICTP, KSCSTE, and University of Paris (S) (under Indo-French Arcus programme), UGC etc. One of the major international programmes includes the Singh-Obama 21st Century Knowledge Initiative with Duke University, USA (with Prof.Mark Wiesner at the Centre for Environmental Impact of Nanotechnology). 14 Ph.Ds and 10 MPhil degrees were awarded under his guidance. Presently, 8 Ph.D students and 2 Post-docs are working with him.