Kathakali which literally means “story play”, originated in the 17th C is actually a dance-drama and is a confluence of nritya (abhinaya:acting), nritta (dance), geetha (song) and vadya (instrument). The theatre communication in Kathakali has a stylised mode of presentation, with heavy and exaggerated make-up and costume, forceful and expressive musical and rhythmic accompaniments and a complicated performance language of dance movements, gesture sequences and facial expressions. During the course of its origin and gradual evolution into a codified dancedrama it is heavily indebted to the rich and indigenous ferformance tradition of Kerala which ranges from ritualitic folk art form like Teyyam, mutiettu, Patayani and kalam ezhuthu on one hand and the highly devotional art form like Krihnanattam on the other. The elaborate dance patterns and dance movements are based on the Gymnastic excercises of the martial art form Kalaripayattu and for facial expression it depends on Kutiyattam, the classical Sanskrit theatre, especially its sign language. 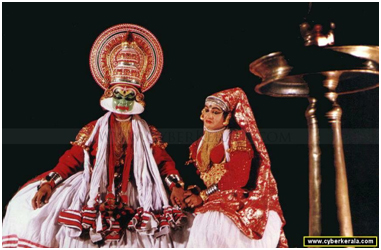 The vocal music, as it evolved, integrated elements from the classical Carnatic and indigenous Sopanam music, while the rhythm is derived from the tradition of Vadya(instrumental music: chenda, maddala, edakka, chenkila and ilathalam are used in kathakali) prevalent in Kerala. The integration of all these classical and folk elements has lent a richness, vivacity and beauty to the art of Kathakali.
Attom (dance) is the technical term for performance, while the verbal text is known as Attakkatha (dance-story) which is a visual, auditive and contemplative (drisya-sravya-manana) poetry. Attakkatha adapts its plots from Indian Mythology and Puranas. Epics like Mahabharatha and Ramayana are also rich sources. The performance text is composed as a mixture of narrative portion (in quatrains called sloka) and dialogue sequences (pada). The sloka which is conventionally written in Sanskrit is a narrative bridge in between two scenes or sometimes it precedes the scene or acting. The “spoken” passages called padams, either in monologue or dialogue form are lyrics set to dance and music.

A scene from “Kuchelavritham”
In a Kathakali performance, the verbal text is recited by the two singers who stand behind the actors on the stage and their textual narration is punctuated by pure dance sequences between couplets in the dialogue or monologue passages, gestures, facial expressions and by improvisational acting called Ilakiyattom. The emphasis in acting is mostly on natyadharmi (stylized acting) aspects rather than lokadharmi (imitative acting) features.The rendering of the meaning of the recited passages both at the level of the word (padartha abhinaya ) and at the level of the sentence (vakyartha abhinaya) is not confined to the use of mudras (hand gestures ) for each word or concept but is extensively devoted to the exploration of the sub-text. All the sequences of a Kathakali play is composed into a form called attaprakaram (performance manual) which gives the complete text of a Kathakali play.Actually a Kathakali performance takes place solely on the basis of this text.
In Kathakali, the emotional state of appreciation(rasa) involves a complex network of spectator’s cognitive and emotional activities that might have been stimulated by various textual characteristics and inputs in performance. The codes which are operative in the performance space like music, costumes, choreography and properties are contributive to the structure and aesthetic of elaboration. The paradigms produced through these elaborations evoke emotions of various kind akin to their contexts. Conceptually, these emotions are not internalized by the actor; instead, the body, with its different features in acting like facial, gesture, dance and movements, is considered “ a mirror which gives the reflection”. Then emotion is conveyed rather generated in the mind of the spectator through the elaboration of symbolic acting. For instance, a glance of love by the hero to the heroine, though she is standing very near, is not done directly towards her but it meets in the spectator where the reception of the heroine is also taking place. Of properties the Kathakali stage can become a palace or forest at a moment’s notice. The actor’s physicalisation of dramatic action and of the rich poetic images of the text , supplemented by his dancing of set pieces of choreography provoke the audience’s imaginative engagement in the creation of the ‘world’ of the play Kathakali dance ranges from the very strong and vigorous (tandava) to the soft or languid (lasya). Other set pieces of choreography such as kalasam (9 kalasams,24 mudras,11 nayanafinaya and 9 jumps) which punctuate the performance of the dramatic text ,help create sustain and/or elaborate on the dramatic mood of a scene.
The elaborate characteristic of the double performance of padam, the elaboration of sloka, the vocalist’s modes of rhythmic elaboration have all been designed and refined over the years as self conscious challenges to the artists’ collective skills. For abhinaya, there are four separate and fully developed styles are adopted. They are Aharya (costumes), Vachika (literary text), Angika (gestrual) and Satvika (emotional). All these basic and intermediary ones are brought on the Kathakali stage under the principal class:pacca (green), katti (knife), minukku (polished), kari (black) and tati (beard). All these types are distinguished primarily by the facial maku-up,the colour and action. Aesthetic emotions are depicted in 9 rasas; sringara (erotic) vira (heroic) karuna (pathetic) adbhutha (wonder) raudra (furious) hasya (comic) bhayanaka (fearful) bhibhatsa (disgust) and santa (tranquil) .Though more than 156 texts are written for Kathakali, only below 20 in number are staged today and among them Nalacharitham, Duryodhanavadham, Kalyana sougandhikam, Kuchaelavritham, Keechaka vadham, Sandhanagopalam, Kirmeeravadham, Nizhalkuthu, Utharaswayamvaram, Bakavadham, Balivadham, Karnasapatham, Daksha yagam, Kiratham, Vadakkan Rajasooyam have got great appreciation among the connossieures.
Conceived by Dr. Raju Vallikunnam
The author is indebted to Professor K.Aiyappa Panikker, Philip zaralli, D. Appukkuttan Nair, Dr.Sudha Gopalakrishnan and K. Bharatha Iyer.