Sitar is a plucked string instrument common to Indian classical music, in the Hindustani classical traditions (specific to northern India). It is fairly a complicated musical instrument. It has movable frets having over 20 strings. It is played with a pick called mezrab. It is perhaps the most popular stringed instruments in India. Sitar is now synonymous with India and Indian culture in the entire world. The origin of Sitar is believed to be from Persia (Iran) and the word meaning is three strings. However its real history is in controversy. It flourished in the 16th and 17th centuries and arrived at its present form in the 18th century Mughal period. It is clear that the present form of Sitar had taken on its present form by the mid-nineteenth century. Therefore, it is a hybrid of Persian and Indian lutes, and is less than three centuries old. There is also a vague information that the sitar may have been developed from the Kachappi Veena.
Sitar has two layers of strings which are made of steel, brass and copper. 13 steel strings on the bottom layer are known as taraf (meaning joy or excitement). They resonate when the strings on the main bridge are plucked. The top layer contains seven strings which are used to create the melody and drone. Two of the three bridges anchor two of the three chikari (drone) strings that serve to extend notes and/or punctuate the rhythm. The remaining five strings lie on a bridge that spans the width of the neck. All seven strings converge, in a parallel manner, on the main bridge that sits on the gourd section. Sitar has three popular modern styles; the two popular styles are the “gayaki style” (or Vilayat Khan style) and the full decorated “instrumental style” (also represented as Ravi Shankar style). 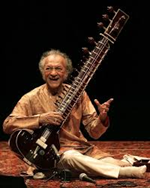 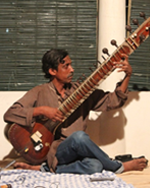 Kerala based Sitarist Shri. Vinod Sankar on a live concert