The Erudite is one of the innovative concepts undertaken by the State Government of Kerala to rejuvenate the field of higher education in the state and to strengthen research activities of various Universities of Kerala. Envisaged by the Kerala Higher Education Council, it receives special attention from the State Ministry of Education. Eminent academicians from India and abroad are invited to state Universities under the programme. These scholars spend few weeks in the campus giving lectures, interacting closely with faculty and students, exploring future collaborations etc. Several leading academicians have already taken part in the programme. Another major initiative in this direction is to invite Nobel Laureates to the campuses in Kerala. Under this programme the Nobel Laureates are invited to the Universities in Kerala to spend few days. They will closely interact with students, teachers and researchers during the period. 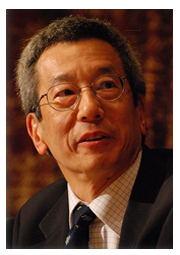 Roger Yonchien Tsien, born in New York (1952), is an Chinese American biochemist and a professor at the Department of Chemistry and Biochemistry, University of California, San Diego. He was awarded the Nobel Prize in chemistry in 2008 for his discovery and development of the green fluorescent protein(GFP) with two other chemists: Martin Chalfie of Columbia University and Osamu Shimomura of Boston University and Marine Biological Laboratory. Prof Tsein complete his graduation in chemistry and physics in 1972. After completing his bachelor’s degree, he joined the Physiological Laboratory at the University of Cambridge in Cambridge, with Marshall Scholarship. He received his PhD in physiology from Churchill College, University of Cambridge in 1977. He was a Research Fellow (1977-81) at Gonville and Caius College, University of Cambridge. In 1982, he was appointed as a faculty in University of California, Berkeley. Since 1989 he has been working at the University of California, San Diego, as a Professor of Pharmacology and Professor of Chemistry and Biochemistry and an investigator of the Howard Hughes Medical Institute. Prof. Tsien is renowned for revolutionizing the fields of cell biology and neurobiology by allowing scientists to peer inside living cells and watch the behavior of molecules in real time. In 2004, Tsien was awarded the Wolf Prize in Medicine for his seminal contribution to the design and biological application of novel fluorescent and photolabile molecules to analyze and perturb cell signal transduction. 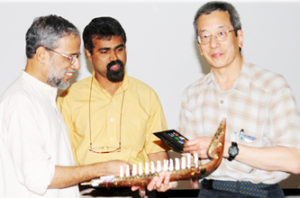 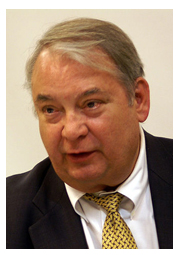 Prof. Ferid Murad, born in Whiting, Indiana (1936), is an Albanian-American Physician and pharmacologist, and a co-winner of the 1998 Nobel Prize in Physiology or Medicine with Robert Furchgott and Louis Ignarro for the discovery that nitric oxide (NO) acts as a signalling molecule in the cardiovascular system, prompting blood vessels to relax and widen. He received his undergraduate degree in chemistry from the pre-med program at DePauw University in 1958, and MD and Ph.D. degrees from Case Western Reserve University in 1965. In 1970, he joined the University of Virginia as a professor and in 1981, he moves to Stanford University. Prof. Murad also serves as a vice president in Abbott Laboratories. In 1997 Prof. Murad joined the University of Texas to create a new department of integrative biology, pharmacology, and physiology. Presently (from April 2011), he is a Professor in the Department of Biochemistry and Molecular Biology at George Washington University. Murad’s key research demonstrated that nitroglycerin and related drugs worked by releasing nitric oxide into the body, which acted as a signaling molecule in the cardiovascular system, making blood vessels dilate. He is a recipient of Albert Lasker Award for Basic Medical Research in 1996. 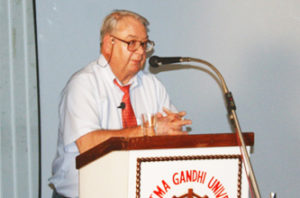 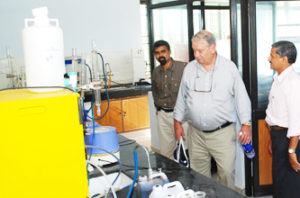 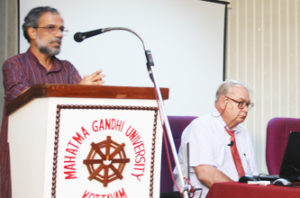 Prof. Murad visits university syndicate when syndicate is in session 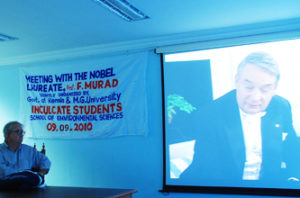 Prof. Murad showing a movie of his nobel winning work to school children 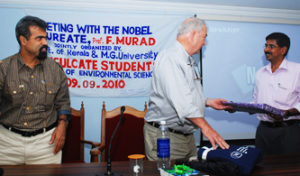 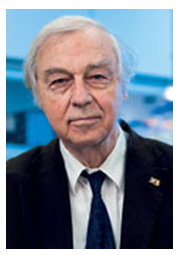 Robert Huber was born in 1937 in Munich, Germany.. He was educated at the Humanistisches Karls-Gymnasium from 1947 to 1956 and then studied chemistry at the Technische Hochschule, receiving his diploma in 1960. He stayed, and did research into using crystallography to elucidate the structure of organic compounds. In 1971 he became a director at the Max Planck Institute for Biochemistry where his team developed methods for the crystallography of proteins. In 1988 he received the Nobel Prize for Chemistry jointly with Johann Deisenhofer and Hartmut Michel. The trio were recognized for their work in first crystallizing an intramembrane protein important in photosynthesis in purple bacteria, and subsequently applying X-ray crystallography to elucidate the protein’s structure. The information provided the first insight into the structural bodies that performed the integral function of photosynthesis. This insight could be translated to understand the more complex analogue of photosynthesis in cyanobacteria which is essentially the same as that in chloroplasts of higher plants. 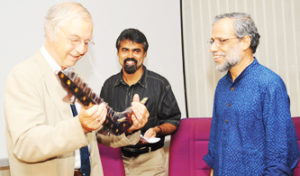 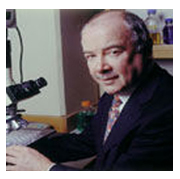 Prof. Johann Deisenhofer was born on September 30, 1943 in Germany. He is Regental Professor and Professor in Biochemistry, and holds the Virginia and Edward Linthicum Distinguished Chair in Biomolecular Science at the University of Texas Southwestern Medical Center at Dallas; he is also Investigator in the Howard Hughes Medical Institute. Deisenhofer is a Member of the National Academy of Sciences of the USA, the Academia Europaea, the German Academy of Natural Scientists Leopoldina, and the Texas Academy of Science, Engineering, and Medicine. In 1971 he graduated with a diploma in physics from Munich’s Technical University. Deisenhofer obtained his Ph.D. from the Max-Planck Institute in 1974. He worked in structural biology at the Max-Planck-Institute for Biochemistry in Martinsried, a small town near Munich, until he moved to Dallas in 1988. In the early 1980s he and his colleagues at the Max-Planck-Institute determined the three-dimensional structure of a photosynthetic reaction center, a complex of four proteins and fourteen co-factors that resides in a bacterial cell membrane. The structure of the reaction center helped explain the detailed mechanism of the conversion of light energy into chemical energy in photosynthesis, a biological process upon which almost all life on our planet depends. For this work he shared the 1986 Biological Physics Prize of the American Physical Society, and the 1988 Otto-Bayer-Prize with Hartmut Michel, and the 1988 Nobel Prize in Chemistry with Hartmut Michel and Robert Huber. 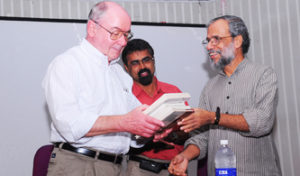 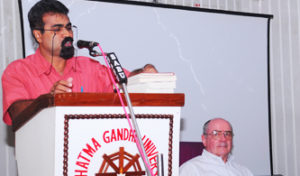 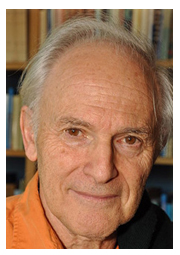 Sir Harold (Harry) Walter Kroto, born in Wisbech, England (1939), is a British chemist and one of the three recipients to share the 1996 Nobel Prize in Chemistry with Robert Curl and Richard Smalley. Presently, he is a Francis Eppes Professor of Chemistry at the Florida State University. He spent a large part of his career at the University of Sussex, where he holds an emeritus professorship. In 1961 he obtained a first class BSc honours degree in chemistry at the University of Sheffield, followed in 1964 by a PhD at the same institution. After postdoctoral research at the National Research Council in Canada and Bell Laboratories in the USA he began teaching and research at the University of Sussex in England in 1967. He became a full professor in 1985, and a Royal Society Research Professor from 1991 – 2001. From 2002-2004 he served as President of the Royal Society of Chemistry. Since 2004 he has held the Francis Eppes Professorship in the chemistry department at Florida State University and presently carries out research in nanoscience and nanotechnology. Kroto was made a Knight Bachelor in the 1996 New Year’s Honours list. Kroto is a member of the Advisory Council for the Campaign for Science and Engineering, as well as of the Board of Scientific Governors at The Scripps Research Institute. He was awarded an honorary doctorate from Tel Aviv University in 2011. 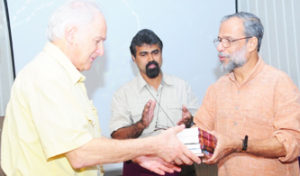 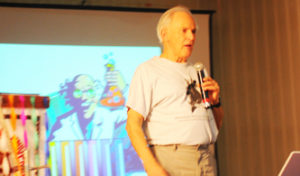 University of Illinois at Urbana–Champaign, USA Nobel prize in Physics, 2003 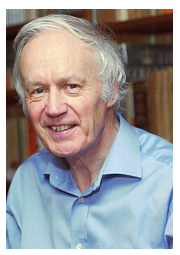 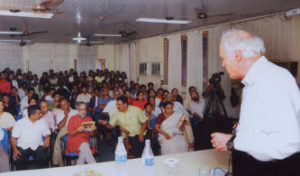 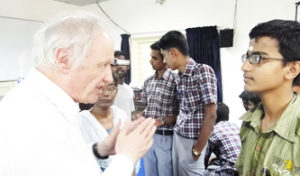