Membrane science and technology and its applications in industry are an upcoming field of research. The easy, less expensive and efficient methods of membrane processes have a promising future in physical applications such as separation processes, energy conversion and biochemical applications such as drug delivery systems, bio sensors, bio reactors etc.
An absolute definition for membrane which describes all the characteristics of it is very difficult. In the most general sense, a membrane could be defined as a phase that act as a barrier to prevent mass movement but allows restricted and/or regulated passage of one or more species through it (Lakshiminarayanaiah, 1984). Membranes can also physically or chemically modify the permeating species or regulate the rate of permeation. Thus membrane may be either passive or reactive depending on the membrane’s ability to alter the chemical nature of the permeating species (Lloyd, 1985). 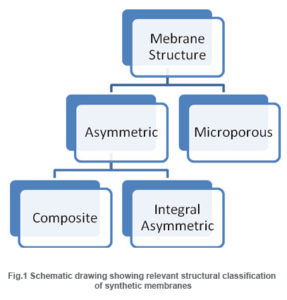 Membranes can be classified according to their structure, source material, phase, purpose etc. They may be broadly classified as natural or synthetic based on their source. The major materials used for the preparation of synthetic membranes are ceramics, polymer and glass. Metals and liquids are also used for preparing some membranes.
Based on their mechanism of action, membranes can be classified as adsorptive, diffusive, ion-exchange or osmotic membranes(R. E. Kesting, 1971).Furthermore, membranes come in two typical structural configurations: their structure can be microporous or asymmetric.

Microporous membranes may have uniform pore size throughout the entire cross section (isotropic) or the pore size may vary along the cross section (anisotropic). Unlike microporous membranes, asymmetric membrane consists of a very “skin” layer on a highly porous substrate and varies in their structure and properties over their cross section. The thin skin on top of the asymmetric porous structure determines its separa¬tion characteristics. They are mainly used in pressure driven separation processes.
The asymmetric membranes obtained from the phase inversion process are generally called “integrally skinned” membranes. Integral asymmetric membranes may consist of porous or homogeneous skin layer made up of ceramics, graphite, metal or metal oxides, and various polymers. If the skin layer in the asymmetric membrane is formed by deposition from solution or plasma, it is termed as “nonintegrally skinned” structure otherwise called composite membranes. Since the composite membranesare usedhere frequently, they are being discussed in the following sessions. 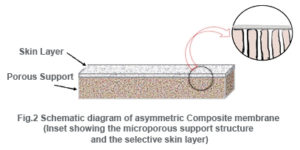 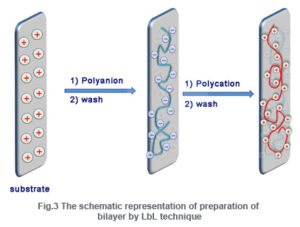 The LbL technique was first mentioned by Iler in 1966, which was then expanded by Decher and Hong.This technique is a template assisted assembly in whichthin films are fabricated by depositing alternating layers of positive and negative charged materials with wash steps in between.
The general methods of deposition involve solution dipping, spraying or spin coating. The formation of layers by spraying was introduced by Schlenoff and the use of spin coaters was demonstrated by Hong and also by Wang. Simple immersion of substrate (of suitable charge) in the solution of oppositely charged (required) material is the easiest way to form a bilayer. The main driving force of multilayer formation is electrostatic attraction between oppositely charged materials. The other interactions include donor/ acceptor interactions, hydrogen bonding, adsorption/drying cycles covalent bonds, stereocomplex formation or specific recognition.
In the first step (Fig. 3),a substrate with positive charge (say) is dipped in an anionic polyelectrolyte solution and a layer of anionic polymer molecules having negative charged functional groups along the polymer back bone is adsorbed. Thus the surface charge is reversed from positive to negative. In the next step washing with pure water is done to remove loosely bounded molecules that may be adhered to the surface by van der Waals force. Now the substrate is dipped in a cationic polyelectrolyte solution and the surface charge is restored to positive. By performing the above steps, a bilayer (bl) is formed. By repeating these consecutive steps in succession, any desired numbers of bilayers can be formed.
The materials used for coating can be small organic molecules or inorganic compound, macromolecules, biomacromolecules such as proteins or DNA or even colloids. The technique can be applied to any solvent accessible surfaces of various size and shapes.
The multimaterial assembly of several compounds using LbLtechnique can be employed to form multilayer films with complex functionality for surface interaction and surface based devices. Multilyers are successfully tailored for many needs like corrosion protection, antireflective coatings, antistatic coatings, surface induced nucleation, anti-fouling, hydrophilicity or hydrofobicity, biocompatibility, antibacterial properties, molecular recognition, molecular separation, chemical sensing or biosensing, microchannel flow control etc.Surface based devices like membrane reactor, photonic devices, and separation membranes are also being fabricated via LbL method.
The advantages of LbL technique are that it is simple, environmentally friendly and ultra-low coast. Another important desirable quality of LbL is the high degree of control over wide range of parameters like thickness, charge density, concentration, adsorption time, ionic strength and temperature. In some cases pH of the solution can be used as a parameter to control the properties of multilayers. The bilayers formed are so thin that this method offers controlled fabrication of nanocomposite multilayer.

Various membrane separation processes like Reverse Osmosis (RO), Nanofiltration (NF), Ultrafiltration (UF), Microfiltration (MF), Dialysis, Electrodialysis and pervaporation are used for wide range of and applications and separation of particle/molecular sizes ranging from large molecules and suspended particles to ions. The pressure driven processes- RO, NF, UF, MF etc. vary in their transport propertiesmainly due to the variation in hydraulic pressure applied. Electrodialysis (ED) uses ion-exchange membranes to transport salt ions from one solution to another solution under the influence of an applied electric potential difference.
Microfiltration is employed to remove suspended particlesin micron range (0.1mm-5 mm) like starch, pollen, latex etc. from dissolved substances by applying pressure below 20 psi. For the purification, concentration and fractionation of macro-molecules, Ultrafiltration is used which requires 20 – 70 psi pressure. Separation of ions, dissociated acids of the order 5- 10Aois made by Nanofiltration by applying 150 – 450 psi pressure. Reverse osmosis requires 500-1500 psi pressure and is able to eliminate monovalent salts and undissociated acids of size ranging from 1-5Ao. Intense research works are going on in membrane processesinwaste water treatment, dewatering and desalination to produce fresh water that is suitable for human consumption or irrigation.

Membranes play a significant role in emerging low emission renewable energy technologies. Fuel cell is one of the most promising clean energy sources since it does not emit harmful substances. Among various kinds of fuel cells, polymer electrolyte membrane fuel cells can be easily engineered as energy source for automobiles, portable devicesas well as domestic applications. The most widely used solid polymer electrolyte membranes in fuel cells are perfluorosulfonic acid membranes such as Nafion, Acipex and Flemion. Different varieties of composite membranes containing inorganic nanoparticle fillers like TiO2, ZrO2, Al2O3 etc. has been prepared in fuel cells. But to make the techniques more applicable, the challenges like durability, cost reduction and water and air management has to be overcome. Composite membranes like Pd-alloy membranes supported on a porous metal are used in Hydrogen separation applications. Thermally stable high performance hydrogen separation membranes with high mechanical strength are being engineered recently.

Membrane Bio-reactor technology combines the biological degradation process by activated sludge with a contaminant separation by means of membrane separation processes. Instead of using gravitational settling or other separation methods, ultrafiltration or microfiltration techniques can be used for the retention of all the suspended impurities and microorganisms in the bioreactor. Thus MBR prevails over the conventional waste water treatment by having the advantages like small reactor requirements, high effluent quality, good disinfection, higher volumetric loading and less sludge production (Wisniewski, 2007).

Membrane processes and applications are becoming a crucial technique in industrial processes, environmental conservation and energy production. Therefore fundamental research on membrane properties and transport phenomena in the various membrane operations is inevitable for the future of the membrane science and technology. Advanced membranes with high flux and high separability along with reduced concentration polarization and zero fouling for large scaleapplications will be the greatest concern in the recent future. The high energy efficiency, operational simplicity, ease of manufacture, transport selectivity and environmental compatibility makes membrane technology an important tool for advanced separation processes and chemical transformations by rectifying the limits encountered in the present scenario.