Unlike electromagnetic radiation, acoustic waves don‘t change the electronic, vibrational or rotational molecular states. The chemical effect of ultrasound arises due to cavitation phenomenon. It is reported that there is no direct interaction taking place between the sound wave and the solute particle when it is irradiated with ultra sound. This indicates that there are some other phenomena taking place when it is irradiated. Generally sound wave causes the vibrational motion of the molecule. When the frequency increases the vibrational motion, cannot hold the molecule intact as a result a cavity is formed. When ultra sound passes through a liquid medium Positive and negative pressure is exerted on a liquid, breaks the van der waals forces which maintain the liquid molecules together. Thus gas-filled microbubles starts growing. 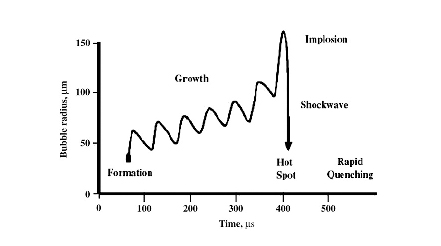 Under the action of destabilizing forces, the bubbles collapse. For example, as shown in Fig 1, a bubble is formed and it grows in successive cycles. When it reaches an unstable state it collapses and it will produce an unusual environment for the reaction. This is termed as cavitation. The formation, growth and collapsing of bubbles are called acoustic cavitation. This increases the temperature and pressure. Bubbles are formed during the rarefaction stage and undergo compression during compression stage. But the rate of expansion during rarefaction stage is more compared to its contraction during compression stage. This is the major mechanism behind the sonochemistry.

Transient cavitation: their life time is very small (Few acoustic cycles). In this energy of collapse is very high. This high energy leads to the formation of new cavitation nuclei.

According to hot spot theory the maximum size reached by the cavity determines the magnitude of the pressure/temperature pulse produced on the collapse and hence the cavitation intensity that can be obtained in the system.
The maximum temperature and pressure reached after the collapse can be estimated by the equation T0 is ambient temperatureis,

Q is the ratio of amount of resonance amplitude to static amplitude and Pm is the pressure of bubble.
It is lower than temperature in transient cavitation.
Cavitational collapse of the bubble will results in the generation of temperature about 5000 K and pressure of about 1700 bar. However, it is remaining only for about 100 ns. It is followed by cooling of rate 1010 Ks-1. The whole path in cavitataion is given in Fig. 1. The overall process is adiabatic. The sufficient energy release results in the generation of the reactive species followed by its stabilization by thermal quenching.

Fig. 2. Various reaction sites in a cavitating bubble
Interior of the bubble
As a result of bubble collapse the temperature inside the cavitation bubble are very high. Due to this the pyrolysis reaction taking place inside the bubble, as a result the OH• formation is inside the cavitation bubble. Volatile solute undergoes pyrolysis, leads to the formation of more oxidizing agents
CCl4→CCl3•+Cl•
CCl3• + H•→HCCl3
The degradation rate depends on the number of radicals formed in this region and the extent of radicals released in to the interface region.
Interface region
Most of the AOPs taking place in the gas- liquid interface region. OH• coming from interior of the bubbles causes the oxidation of the solute in this region.
OH• + S→P
Bulk liquid region
H2O2 is the major product by the recombination of H• and OH• during ultrasound irradiation. These are present in the bulk liquid region. About 90µM of H2O2 are formed during the sonolysis of water. H2O2 is a good OH•scavenger causes the OH• to be less reactive by forming OOH•.
H2O2 + •OH →HO2•
Sonolysis combined with other AOPs
Sono- Fenton reaction
It mainly indicates the effect of ultra sound in Fenton treatment. Ultra sound enhances the fenton reaction by producing extra H2O2. As a result the percentage of degradation in fenton is less compared to sono Fenton.
The main reactions involved are,
Fe2+ + H2O2→Fe3+ + •OH + OH –
H2O2 + •OH → HO2• + H2O
Fe3+ + HO2•→ Fe2+++H+ + O2
Reaction in sonolysis is
H2O ))))) •OH+H •
The O2 formed react with H • to form more •OH by the reaction
O2 + H• → •OH +O•

In sono photo catalysis ultra sound enhances the catalytic activity of TiO2particle and increases the efficiency. Ultra sound places an important role in photo catalysis reaction by affecting the catalytic activity of TiO2. In sonophotocatalysis, the pollutants adsorbed on the surface of TiO2 particle can move towards the interface of the cavitating bubble provides an additional path for the degradation.